The Spirit of Salt Lake

The Salt Lake City Marathon began at 7:00 a.m., in a light rain that waited until after “Sweet Caroline,” a tribute to Boston, to begin falling.  Spectators, moms and dads with their children wrapped in blankets, stood on the side of the road spinning noise makers, clapping their hands, and holding up encouraging signs.  The ran came down harder, but the spectators didn’t seemed fazed.

Massive crowds aren’t something you’ll find in Salt Lake. It is not a dense city, and therefore doesn’t exhibit much fan fare around any events other than home court Jazz Games, and even the crowds at those are manageable.  The Salt Lake City Marathon only just celebrated it’s 10th anniversary. The inspiration must have come from The Olympics, which the city hosted in 2001, just three years before the first Marathon. All major cities have a major race, and the honor of hosting The Olympics had given Salt Lake the notion that it might be able to apply such an adjective to itself.

The spectators did not need to be contained behind barriers – there weren’t enough of them. Just small families every block or so, and a couple of yard parties of between five to ten attendees playing music on radios, barbecuing breakfast, and a few individuals, still in their pajamas, standing on their porches, coffee in hand, watching out of simple curiosity.

Their cheers made my heart leap. They shouted words of encouragement, and I pumped my fists and yelled, “thank you!” And I meant it. The connection I made with each of them felt personal and significant. These strangers were my friends.

My dad dropped me off at the starting line in the morning, and then just under an hour later met me in Sugarhouse Park, at mile five. He stood in the biggest crowd I’d seen yet – about fifteen people deep. I ran up to him and gave him a big hug.

At mile seven, a spectator – not a volunteer – handed out slices of apples. She had gone to the store, purchased boxes upon boxes of apples with her own money, had set up a little card table in front of her house and was speedily slicing them up.

At mile eight, a little boy standing near his father handed out whole bottles of water.

At mile nine, a young woman started running alongside me. “I have a question for you,” she said. “Are your hands cold?” Indeed, they were. “I have this two-dollar pair of gloves. You can have them and just throw them away when you don’t want them anymore.” They were black chenille winter gloves. I put them on a gave her a hug and an almost tearful thank you. I wore them for the next five miles.

Along that same stretch of road, a woman had set up a soft-serve ice cream machine in her front yard and was handing out small cones of sorbet. “I hope this helps!” she said as I reached out for one.

At mile 15, I found my dad standing on the side of Van Winkle and 5100 south, just east of my old high school. He handed me half a banana and a cheese danish.  These boosted my blood sugar and are, I believe, the reason I was able to finish the race (I’d hit a wall and was near to giving up).

At mile 20, as I ran through a surprisingly rural part of town just west of where my parents live – little rambler homes with empty lots scattered between and no sidewalks – my dad stepped out from behind a cherry tree. Giving him a hug and hearing his strengthening words made me feel like I could in fact finish this thing.

At mile 22, a little boy standing next to a bucket of candy and a little table with a pitcher of lemonade on it shouted, “free treats and sugar water!”

A little girl, playing on the curb, handed me a dandelion. “Here you go!” she said.

At mile 23, my parents stood on the side of the road and watched me run by. It was raining, and my mom had her coat pulled up high around her neck.  A duck waddled across the street with five little ducklings trailing behind her.

At mile 24, my brother stood on the sidewalk of 600 East, just one block from his house. He carried a cup of coffee and had a smile of amazement on his face. “You hurting?” he said. “You’ve run a long way!” 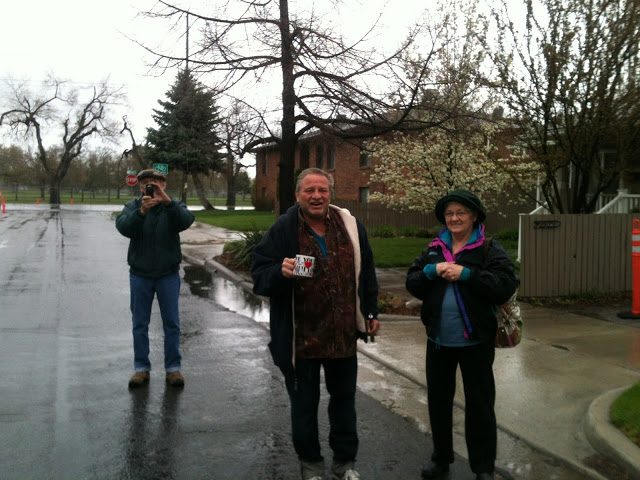 At mile 25, the rain became torrential, falling in heavy sheets. Then, it became hard and hurtful and I realized it was hailing. I was alone on the road, the runners nearest me in front and behind a good twenty yards away. I started cursing at the sky, shouting a storm of obscenities about the pain, the fatigue, the wetness. Three twenty-somethings smoking cigarettes on their veranda heard me and started laughing. An old woman sitting on her enclosed porch said something that, although I couldn’t hear, seemed encouraging. I smiled and said thank you.

As soon as I crossed the finish line, hugged my family and my best friend, my body went on recovery lock-down. I could barely walk. I was in such misery that when my sister texted me and asked which race I wanted to do next, I answered: “No next.”

Now, less than a week later, I am excited to register for the Salt Lake City Marathon again next year. The spirit of Salt Lake City is one of love and friendship and neighborliness. I love it and it’s people, and I can’t wait to run through its streets again. 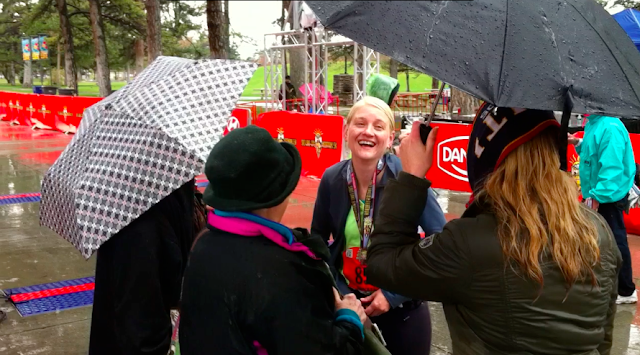 2 thoughts on “The Spirit of Salt Lake”