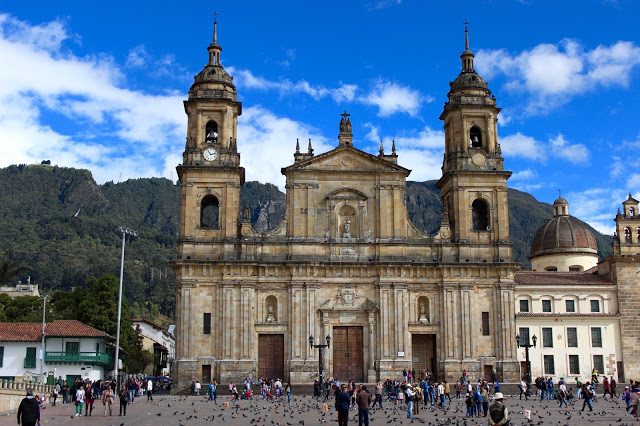 I keep asking myself why I am alone in Bogotá.

In November, I spent a week in Cartagena and Mompox, as part of a journalism fellowship. I intended to travel solo for a week thereafter, but flew home to Los Angeles in a hurry, to address some personal . . . stuff (there’s no better word). A week later, I regretted abandoning my original plan. Out of curiosity, I searched roundtrip flights to Bogotá, and found one that was remarkably inexpensive. I booked it. And here I am.

I do not speak Spanish. For this reason, not only am I alone in Bogotá, I am silent in Bogotá. I could be on a spiritual retreat or a vision quest. But, no, I am just traveling. Quietly, and alone. In the last two days, I have spoken maybe a dozen words: buenas, cafe, por favor, uno arepa con queso, agua sin gas, la cuenta, gracias.

Yesterday, as I got dressed for my first full day, I realized I had forgotten to pack my contacts. The thought of having to wear my glasses all week made me want to bail on the whole trip again. After beginning my day at a cafe with a tinto (sort of an espresso) and a pan de queso, I found a busy boulevard lined with – what luck – optometry shops. I stopped in one and showed the woman at the counter an old 1-800-CONTACTS email on my iPhone. Without more than two words exchanged in the same language (which were sí and gracias), I purchased two packs of contacts.

I then walked to the Plaza de Mercado de Paloquemao, a large food market I’d read about. Along the 1.5 kilometer walk, I realized I probably should’ve taken a cab. The route took me through a homeless encampment along a median lined with spare tires and a ramshackle neighborhood where I saw dozens of prostitutes out in broad daylight, wearing either vinyl hot pants and stiletto boots, or nothing but fishnet body stockings so tight that their flesh bubbled through the netting.

At the market, I tried Guanabana, a large fruit that resembles a Yoshi egg, with slimy white meat that tastes like a cross between pineapple, banana and sugar cane.

From there, I walked two miles through an industrial area of factories and warehouses, up Calle 13, a busy boulevard of electronic shops, lighting shops and cell phone stores. Piles of garbage dotted every corner, and people tossed their litter into the streets. Along Calle 13, homeless men tore open bulging black trash bags and spread the contents out into long layers in the gutter, picking through for food and clothing. Students and businessmen and women stepped around them.

On my way to Plaza De Bolivar, I navigated through a chaotic street market, so crowded that for several blocks my body was not out of contact with someone else’s – feet, elbows, knees, hips all vying for a bit of space. Vendors sold Christmas lights, stuffed animals, plastic housewares, cheap bras and lingerie. Men shoved carts of candies and cigarettes through the oncoming crowd of shoppers and other peddlers. When I finally pushed my way onto Carrera 8, I was surprised by the relative serenity at Plaza de Bolívar. Children fed flocks of pigeons with seed purchased from individual sellers, and groups of tourists from all over the world posed awkwardly for selfies. I did the same, and then a man approached me and started shining my boots. I kicked him off until he said “sólo un mil.”  For $1,000 pesos, about 35 cents, I let him shine my boots. 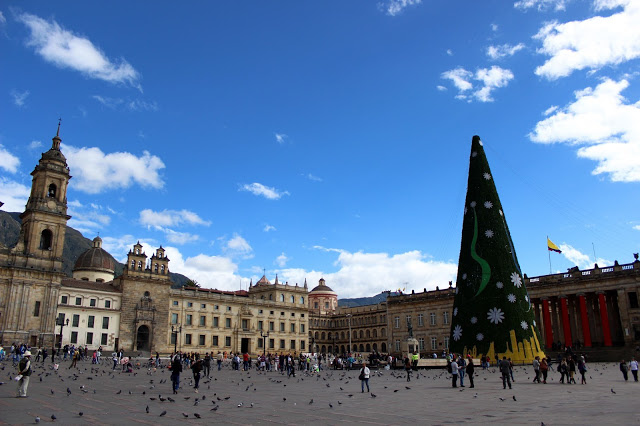 A stroll through La Candelaria, the Colonial district, with its colorful, hilly streets and lively bars and restaurants, added a much-welcomed layer of charm to my day. I then wandered over to La Macarena, an equally charming neighborhood, where I settled in for a few beers at Bogotá Beer Company, and dinner at a kitschy restaurant called La Jugueteria. Juguetes are toys, and this restaurant was full of them.

An awkward place to dine alone, among families and birthday parties. Strings of lights illuminating a hallway of tchotchkes through an arched doorway enticed me – of course I found myself inside, eating a steak and drinking a mojito and wondering, again, what am I doing here.