The Razzies: The Worst (Best) Award Show in Hollywood 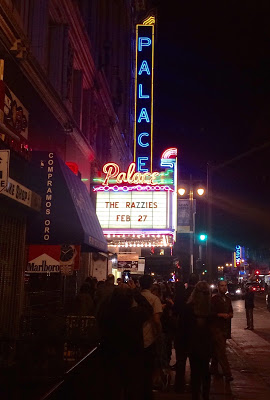 The night before the Academy Awards in Hollywood, the historic Palace Theatre in Downtown Los Angeles opened its doors to an audience of no-names and non-celebrities to award Hollywood’s worst with the not-so-coveted Razzie Award.

The audience was eclectic, some dressed in typical evening attire, others in ironic costume like frilly prom dresses and ridiculous patterned jackets. They lined up under the glittering marquis to take selfies at a step-and-repeat backdrop along a flimsy red “carpet” of crepe paper that quickly became torn and soiled. A woman in a multi-layered, bulbous pink prom dress and a blonde starlet wig posed on the red carpet with her date who wore a tux. “We thought we’d been invited to the Oscars, but we wound up at this fuckhole,” she told me. Her date said her name was Crystal Terrace, and she was nobody. “What the hell are we doing here? Look,” Crystal said, pointing at people in the entrance line, “that guy’s in a velvet coat and he has gauges. That guy’s sunburned. That girl’s hair looks like Top Ramen.” I asked her if she was an actor. “No, and I hate actors,” she said. Two blonde, overly-tanned women stepped onto the red carpet, wearing loud, skin-tight floral-print dresses a la the 1990s. Crystal Terrace grunted and moved away. 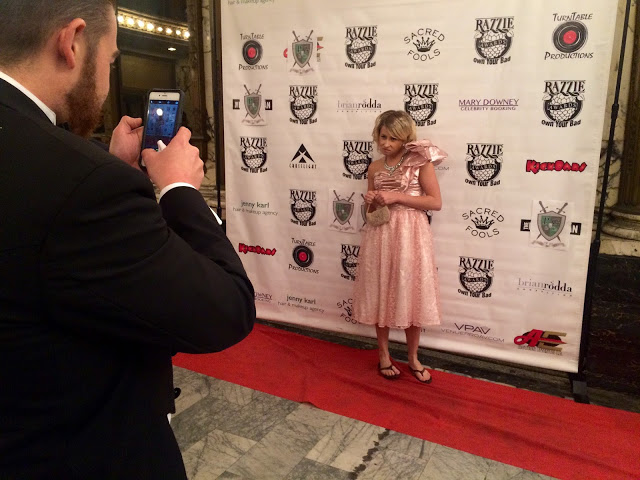 In the lobby, a small crowd swarmed around the concessions table. “Where’s the alchohol?” someone asked. Water was the only beverage on hand, and the snack offerings were meager: Karamel Pop, coffee candy, Mary Janes, and beer nuts.
I took a seat in the balcony, with the other press. A man dressed in head-to-toe khaki, like a safari guide, set up a camera on a tri-pod. “Wow, you really dressed up. I guess I didn’t wear the right thing,” he said, observing my sequin dress, sparkle tights and gold heels. I told him I had a cocktail party to attend afterward. “Oh, good. I thought, ‘she’s clearly never been to this before — it’s not that big of a deal,” he said. I laughed. I didn’t let on that I did not, in fact, have a cocktail party to go to; I’d been excited about the event, and dressed up in full earnest.
The show was scheduled to start at 8:00pm, but the stage remained empty and the lights did not dim until 8:30. At 8:33, audio from a backstage microphone drifted into the auditorium, delivering a private conversation from performers, unaware their sound had been turned on. They talked about the temperature, the show’s start time, their costumes. At 8:35, two presenters took to the stage, humming the tune of the Star Wars theme on kazoos while the history of the Razzie Awards scrolled behind them in yellow lettering, like the movie’s iconic opening. Then, the curtain raised and a woman came out singing a rendition of Adele’s “Hello,” rewritten with new lyrics. “I won an Oscar although nobody is quite sure why,” she belted, and then a man in a suit joined her in a duet. He stripped down to leather dominatrix-esque undies and knee-high stilletos — a reference to Shades of Grey — and “Will Smith” joined with a rap, ensuring the audience that “if you make a bad movie we can make one worse.” The opening number, staged by Sacred Fools Theatre Company, was hilarious, tightly rehearsed and performed. The audience responded with uproarious applause. Expectations for the rest of the show were high, but it’d all be downhill from here.

The curtain dropped and a man’s voice inquired over the speakers, “is there an experienced award host in the house?” A medley of “me, me, me’s” chimed from the audience, and a man shouted, “I’m not experienced, but I can do it.” He walked onto the stage, and the show had officially begun.

For each nominee, the presenters read bad reviews. “Between Kevin James and a meatball parmigiana for president, I’d say the sandwich is more plausible,” Kyle Smith wrote in the NY Post about James’ performance in Pixels. “Tatum comes off better than Redmayne’s 14,000-year-old cross between Donald Trump and Sweeney Todd,” NY Post Lou Lumenick wrote, also in the NY Post, about Redmayne’s work in Jupiter Ascending.
Between award announcements, “previews” of each worst film nominee played, in the form of sloppy, too-long, tongue-in-cheek live-action stagings, that reimagined the films as even worse than they actually were. For The Fantastic 4, announced as “an expansive pilot for a TV show that will never get picked up,” the film stood on trial in Judge Judy’s court where it was determined guilty of being terrible. Sound and production issues plagued the performances – mics dropped out, others crackled, the curtain didn’t raise on time, video queues didn’t show up. As two presenters announced the nominees for Worst Supporting Actress, pictures of the actresses appeared on screen behind them – in completely the wrong order.
A performer took the stage with a microphone, preparing to sing, when the wrong song blasted over the speakers. “Nope. That’s not right.” she said. Two other women joined her, and they launched into a Dream Girls-style song imploring the audience to please stay for the second half. 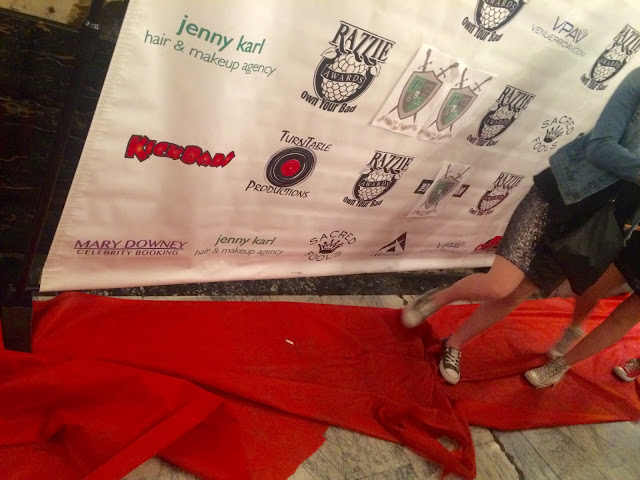 At intermission, audience members wondered if the production quality was intentional. “Are they trying to be so bad?” someone asked his friend. “Yeah, I think so. I mean, you could ask the same about the movies,” he responded.
Filed Under: Events, Los Angeles, The City Observed
Thank Gods, We’re Getting a New Beverly Center
The City Exposed: Western and Fountain on Foot